Salmonella – continues to be a hot topic in 2017 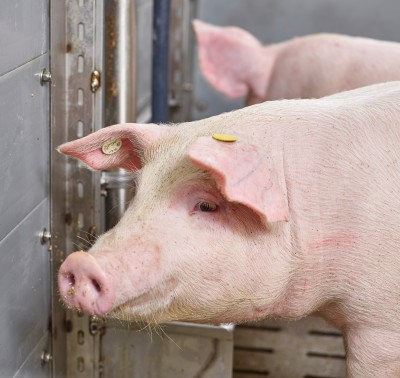 Salmonella is a really tough bacterium which can occur almost everywhere all over the world. In the case of pigs, Salmonella infections are primarily transmitted orally through faeces, rodents or the spread of pathogens in the herd. When pigs are marketed, the Salmonella status of a farm is now becoming an increasingly crucial issue. This is because some Salmonella strains have the potential to spread zoonotic diseases that can cause serious illnesses to humans. The German Federal Institute for Risk Assessment has confirmed that meat from a single pig may be consumed by up to 200 different individuals. This illustrates that Salmonella from a pig must be prevented from entering the food chain at all costs.

The Salmonella status of a pig farm is determined indirectly by detecting antibodies to Salmonella through a so-called ELISA test, and is described by the “Optical Density” (OD) parameter. Antibody detection is routinely performed on the evisceration line on a specified number of samples from slaughter pigs from each farm every year. Besides testing meat juice samples, it is also possible for a vet to detect antibodies by taking a blood sample from a live animal. 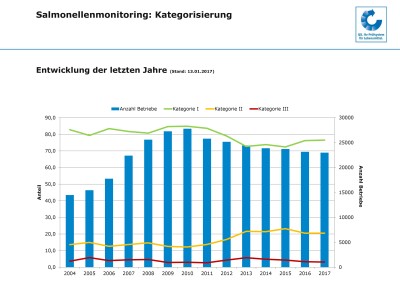 Laboratory results are interpreted as follows according to QS: an OD value of up to 39 characterises a negative investigation result, an OD value of 40 or more characterises a positive result. Supplying farms are classified as Category I, II or III depending on the number of positive investigation results they obtain relative to the overall level of sampling. Farms that score less than 20% positive test results are managed as so-called Category 1 farms as part of Salmonella monitoring. Farms that have 20% to 40% positive Salmonella test results are treated as Category 2 farms. Category 3 farms are those for which more than 40% of samples tested positive for Salmonella. 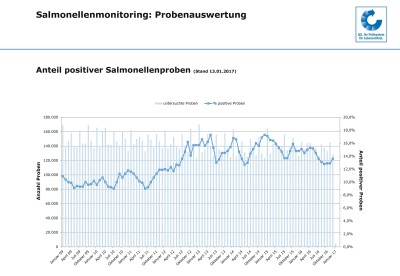 Farms in Category II – currently roughly 1/5 of QS farms – need to take measures to reduce Salmonella without delay in order to avoid slipping into Category III. Farms in this category must report their classification to the veterinary inspection office within two weeks and, together with the farm vet or Pig Health Service, take measures to reduce Salmonella contamination. In addition, they can expect to experience problems when marketing their animals for slaughter. In the fourth quarter of 2016, 200 farms dropped into Category III. 212 farms have been in this critical category for over a year. 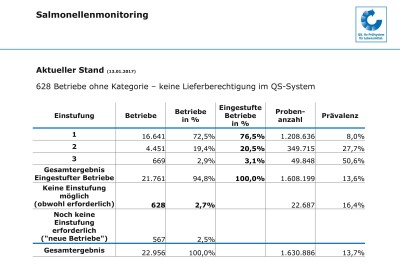 AGRAVIS Raiffeisen AG has been tackling this complex issue energetically for several years. In principle, an outbreak of Salmonella is a multifactorial phenomenon that can have many possible causes. There is an urgent need to thoroughly clean and disinfect pigsties on an all-in, all-out basis. Accommodating pigs in different age categories separately is a prerequisite. The success of pigsty disinfection is crucially dependent on thorough cleaning and subsequent disinfecting. At the same time, insects and rodents must be consistently controlled. It is advisable to call in the services of AGRAVIS hygiene specialists to help devise an action plan that is appropriate to your individual farm.

Besides strict compliance with hygiene management measures, it is essential to only purchase animals that have tested negative for Salmonella in order to maintain a herd with a normal Salmonella status. Experience shows that partnership-based cooperation between the seller and buyer, in liaison with the vet who looks after the livestock, offers the best prospect of success. 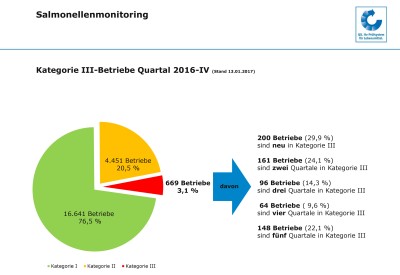 Generally speaking, an animal’s intestines are its biggest immune-system organ. Viewed from this perspective, it is clear that feed that promotes intestinal health is another important weapon in combating Salmonella successfully. The use of feed acids in the composition of rations has, above all, become accepted practice, often in combination with management measures intended to improve Salmonella status in the context of ongoing monitoring. Besides having an antimicrobial effect by reducing pH values in the digestive tract, using Miravit L-cid Standard also, quite incidentally, improves protein digestibility, thus having a positive impact on pigs’ feed conversion. This supplement feed is a liquid lactic acid product which can be offered to animals in their drinking water as well as in liquid feed. For farms that prefer to use lactic acid in dry feed, Miravit LactAcid is the right product because it is a free-flowing dry acid. Both acid products have one feature in common: because of their special formula, they are extremely efficient in reducing pH values and highly palatable. They are also user-friendly (NC goods) and involve no documentation obligations (HACCP concept).

In contrast, using mono acids does involve documentation obligations. Investigations conducted by the University of Veterinary Medicine in Hanover prove that feed structure and/or relatively coarsely ground feed has a positive effect on the gastrointestinal health of animals and can have a positive impact on the prevalence of Salmonella. The positive effect of increased dietary roughage in feed rations on Salmonella outbreaks can be explained as follows: if an animal has a sufficiently high proportion of bacterially fermentable substances in its large intestine, they produce volatile fatty acids that act as a natural protective barrier and make it more difficult for harmful bacteria from the anterior portion of the gut to proliferate. Our “Feeding the Future” concept takes this and other aspects of feeding into account. This is why the Olympig alone, Fisopan supplement and VitaMiralmineral feed programme has been restructured in line with the current state of knowledge.

Further information about this topical subject can be obtained from Product Managers Dr Peter Rösmann, peter.roesmann@agravis.de, and Dieter Jürgens, dieter.juergens@agravis.de or by phoning 0251 682-1144.